Overview of the Ribbon Device Prop

Posted by SG Merc in Weapons > Ribbon Device
The Goa'uld Ribbon Device, or Kara Kesh in Goa'uld, is one of the most recognizable props from Stargate SG-1. This comprehensive article studies each of the original studio props, and breaks down the prop by it's unique characteristics.

One of the two alien weapons to make the transition from the Stargate feature film into Stargate SG1 was the Kara Kesh, better known as the Ribbon Device. Originally used by Ra, the weapon underwent a complete redesign for the television adaption of the movie. The television version lost much of it's jewelry like attributes, but gained a sleek whole-arm design which made it larger and significantly more imposing.

The prop first appeared as a shiny gold colored weapon in Children of the Gods, with several other variations later being introduced in the series. In total there were three different variations of the Ribbon Device featured throughout SG-1. The actual props themselves were built from several different materials throughout the series and movie adoptions. In total there were 5 Ribbon Devices made by the studio and featured on screen, and a sixth assembled from production materials. Two were sold at auction, two through online listings, and one sold privately by the studio.

The design of the prop consists of 5 caps worn on the fingers and thumb, along with matching rings. Each of these is connected using common hardware extension springs to a crystal centered over the wearer's palm. This crystal is the emitter part of the weapon, which would glow when fired. The crystal is mounted to a strap which surrounds the thumb, and is part of a band which then coils around the wearer's arm. This armband is embellished with a dome and spokes at the top of the arm, and crystal atop the wearers hand. The armband featured the signature lines present on Goa'uld technology (Jaffa Lines), which varied in their design from prop-to-prop.

The first two Ribbon Devices made by the prop department were gold and silver respectively. These two were made mostly (but not entirely) of metal, and only one of each version was made. The gold version was manufactured from polished brass, and the silver one from aluminum. Commonly the gold model was used by Apophis, Hathor and Nirti. The silver one used by Heru'ur, Seth and Osirus. This 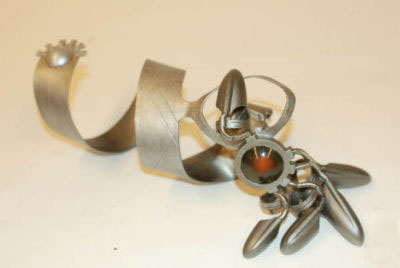 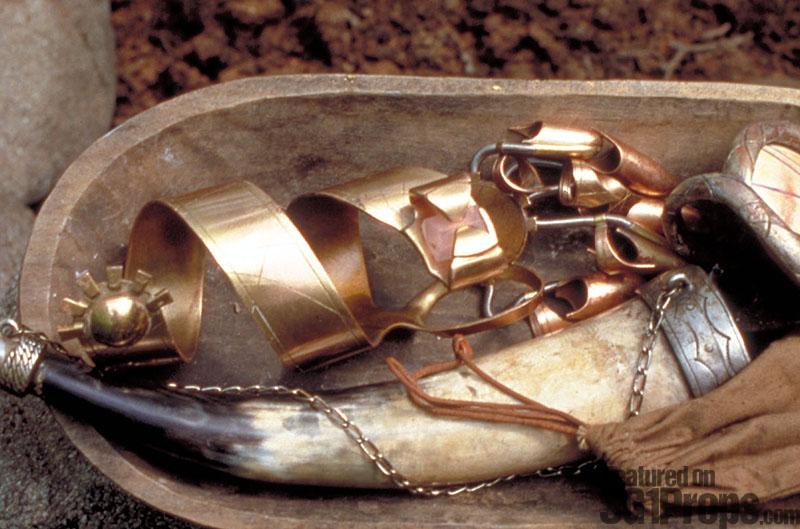 Both of these Ribbon Devices featured light up palm crystals which were operated by remote control. These are the only two ribbon devices which included any electronics. 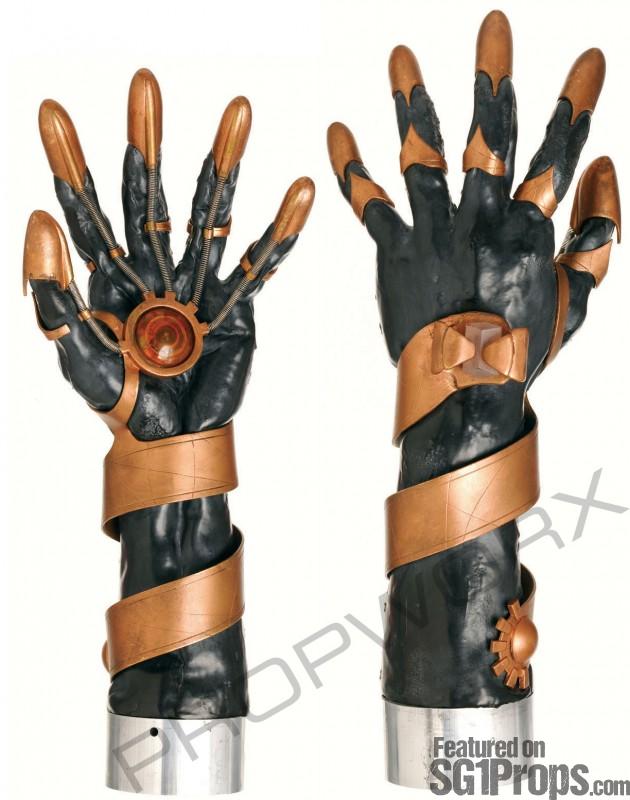 For the spin off movies, Ark of Truth and Continuum, two additional gold colored Ribbon Devices were made. A hero prop was made which was a combination of metal and resin parts, and also a full-resin stunt version. Like the third ribbon device above, neither movie version included electronics. These props were intended to have lighting effects generated entirely in post production. The partial-metal version was most likely used for any close up scenes. 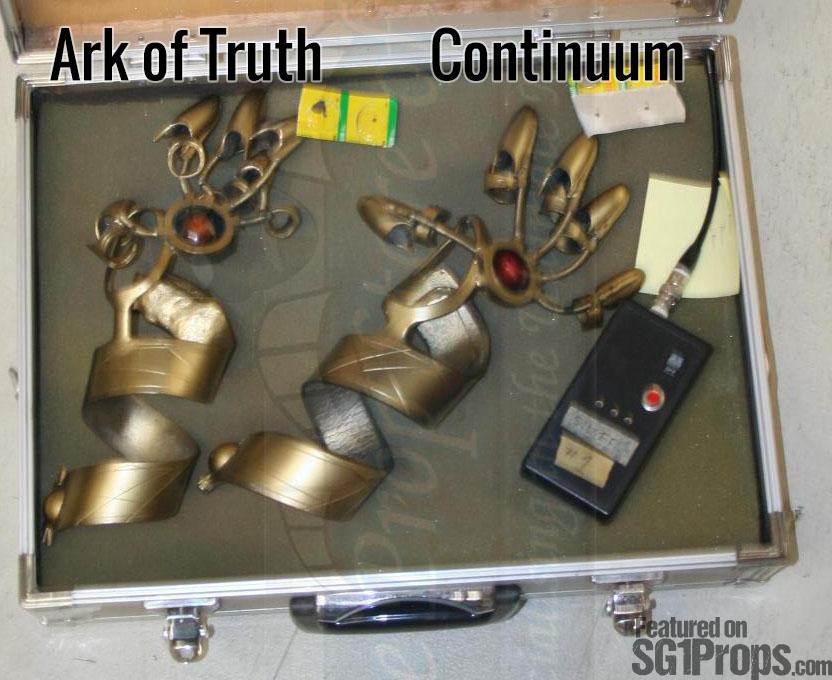 To protect the arm of the actor wearing the prop, the original two metal props were coated with resin on the inside of the armband and palm crystal. This prevented the sharp edges from cutting any of the actors or snagging on costumes. The resin model from Continuum featured black foam padding on the inside. The SG1Props version is lined on the inside with black felt. When Amanda Tapping wore our Ribbon Device at a Sanctuary for Kids auction she remarked at how comfortable it was compared to the original prop.

In 2016 The Prop Store auctioned off a ribbon device which was never seen on the show. This model included a gold metal armband without any Jaffa lines, silver metal finger caps, gold rings without Jaffa lines, and a solid resin center crystal which was painted red. This model appeared to have been pieced together from various parts remaining from the production (perhaps assembled post production by the buyer) and was badly damaged. 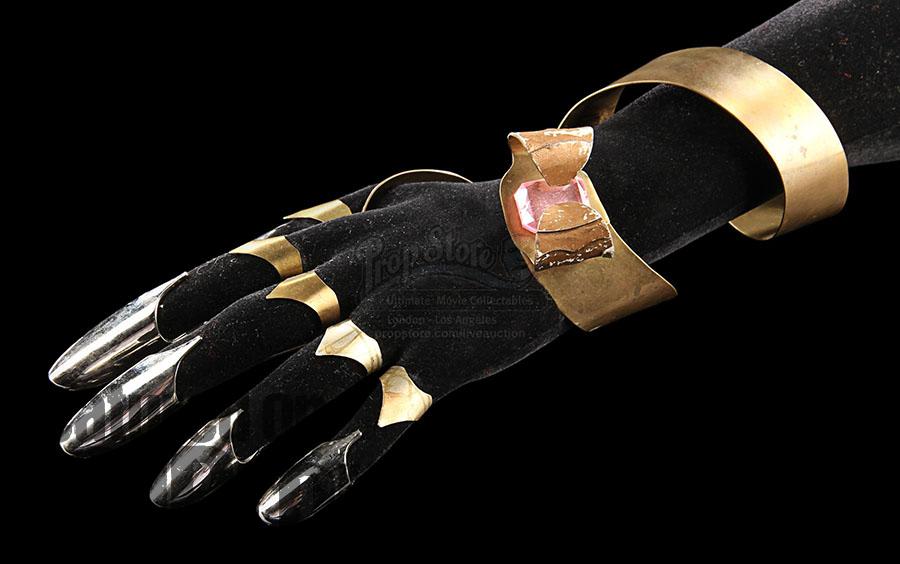 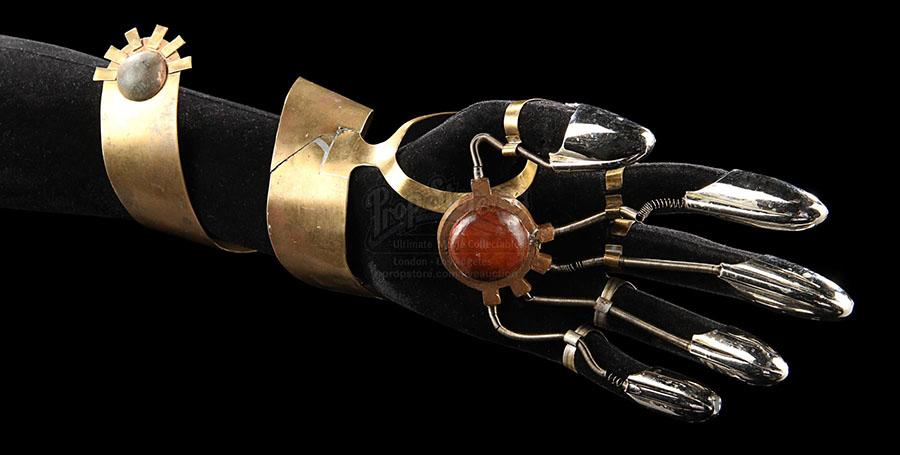 I hope this article clears up some of the false information out there about this prop. The Ribbon Device does hold a special meaning for me being the first Stargate prop I made. The SG1Props replica has evolved over the years, and will be undergoing another transformation in the near future which I hope to share with the world in the months to come.

Special thanks to Handheld Museum for contributing to this article. Check out the Handheld Museum website for a close up look at the hero silver Ribbon Device, and also many other great handheld props from other films and television shows.

Stargate SG-1, Stargate Atlantis, Stargate Universe, and Stargate Origins are copyright © MGM Entertainment. This site and its content are copyright ©2022 sg1props.com. Reproduction of any content from this website without the express written permission of SG1Props is prohibited.
This site is not affiliated with MGM or any of it's partners.
Use of this site is bound by the user agreement found in our Terms Of Use and Privacy Policy.
DMCA Notice